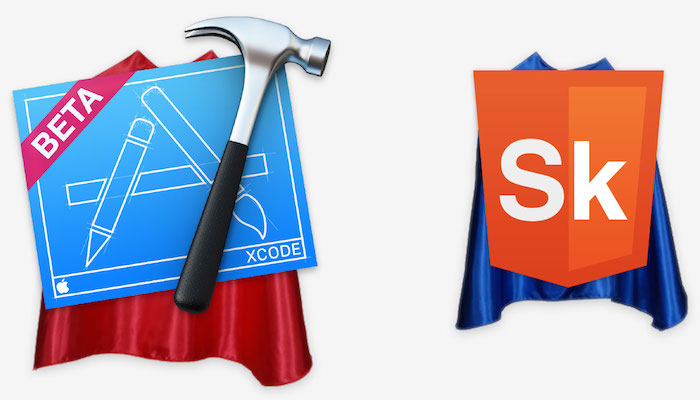 Xcode traditionally runs its compiler (Clang) in-process, which means that any time the compiler would crash, so would the IDE. 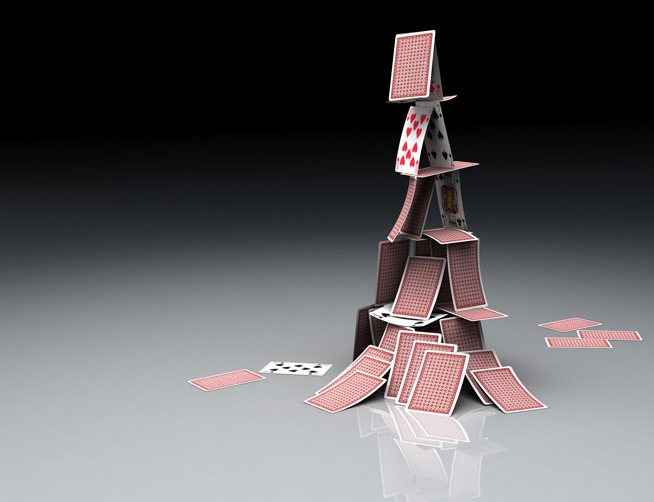 Exacerbating the problem, Xcode can easily invoke the compiler thousands of times to parse, highlight and typeset source code, all before a user ever hits ⌘+B. That’s because unlike most editors (Vim/Sublime/etc), Xcode doesn’t use regular expressions to parse source code, but rather Clang’s powerful (though much more complex) parser/tokenizer.

Thankfully, Swift in Xcode 6 moves away from this architecture1, combining all these source code manipulation features into a separate process that communicates with Xcode through XPC: sourcekitd. This XPC daemon is launched whenever Xcode 6 loads any Swift code. 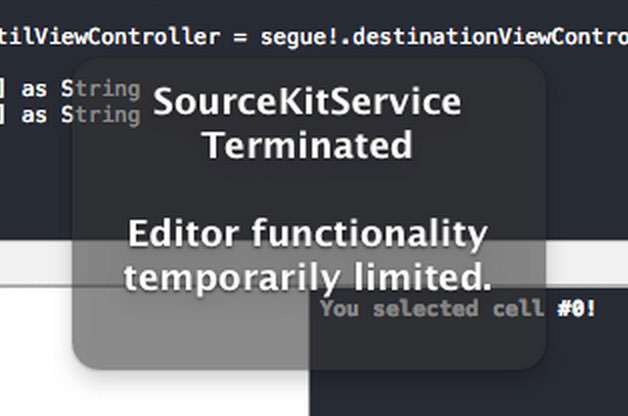 Life would be miserable if Xcode crashed every time this appeared

Since SourceKit is a private and undocumented tool, we need to get a little creative to learn how to use it. By setting the SOURCEKIT_LOGGING2 environment variable, Xcode will log its SourceKit communications to stdout, allowing us to monitor its communications in realtime. This is how many of the commands covered in this article were discovered.

SourceKit uses a Clang feature called the USR (Unified Symbol Resolution) as a unique identifier for a source code token (i.e. class, property, method, etc.). This is what allows you to ⌘+click any token in Xcode and navigate to its definition. The USR is even more powerful now that it can unify a representation across languages (Swift/ObjC).

The USR at work

To print the USR’s from a Swift file (and their locations), you can run the following command:

⌘+clicking on a token defined in Objective-C from Swift will cause Xcode to trigger a Swift-like header to be generated. I say Swift-like because this generated file is not valid Swift3, but at least displays the Swift syntax equivalent to the Objective-C tokens.

Using SourceKit from the command line 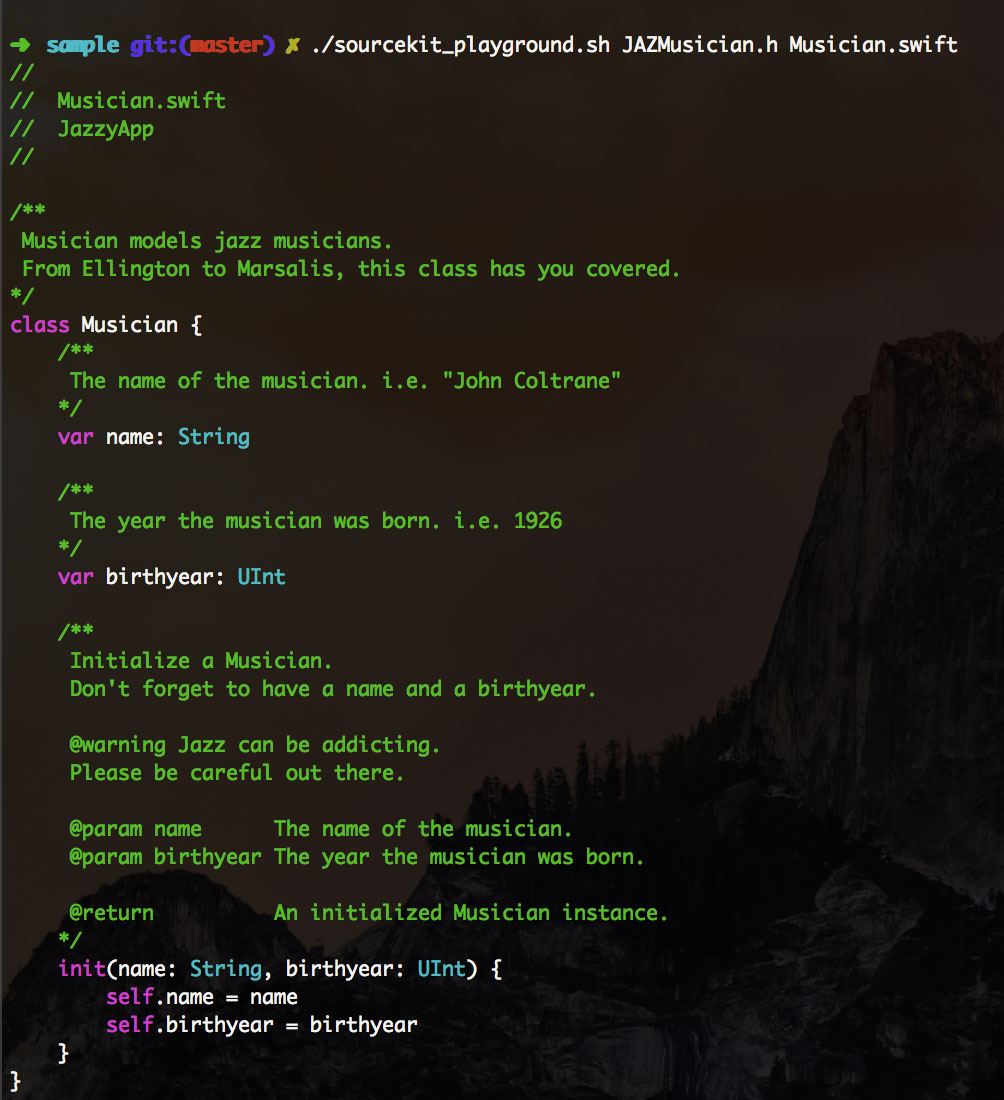 There are 3 main command line tools that allow to interact with SourceKit: sourcekitd-test, swift-ide-test and swift.

I compiled a shell script with documentation that runs through many useful commands like syntax highlighting, interface generation, AST parsing, demangling, and more.

The script is available on GitHub as a gist.

Because SourceKit lives outside of Xcode, it’s possible to leverage it to build anything from a Swift IDE to a documentation generator.

jazzy is a command-line utility that generates documentation for your Swift and Objective-C projects. It uses SourceKit to derive Swift syntax from Objective-C defined tokens (i.e. class, property, method, etc.).

SwiftEdit is a proof-of-concept editor that supports syntax highlighting for Swift files. 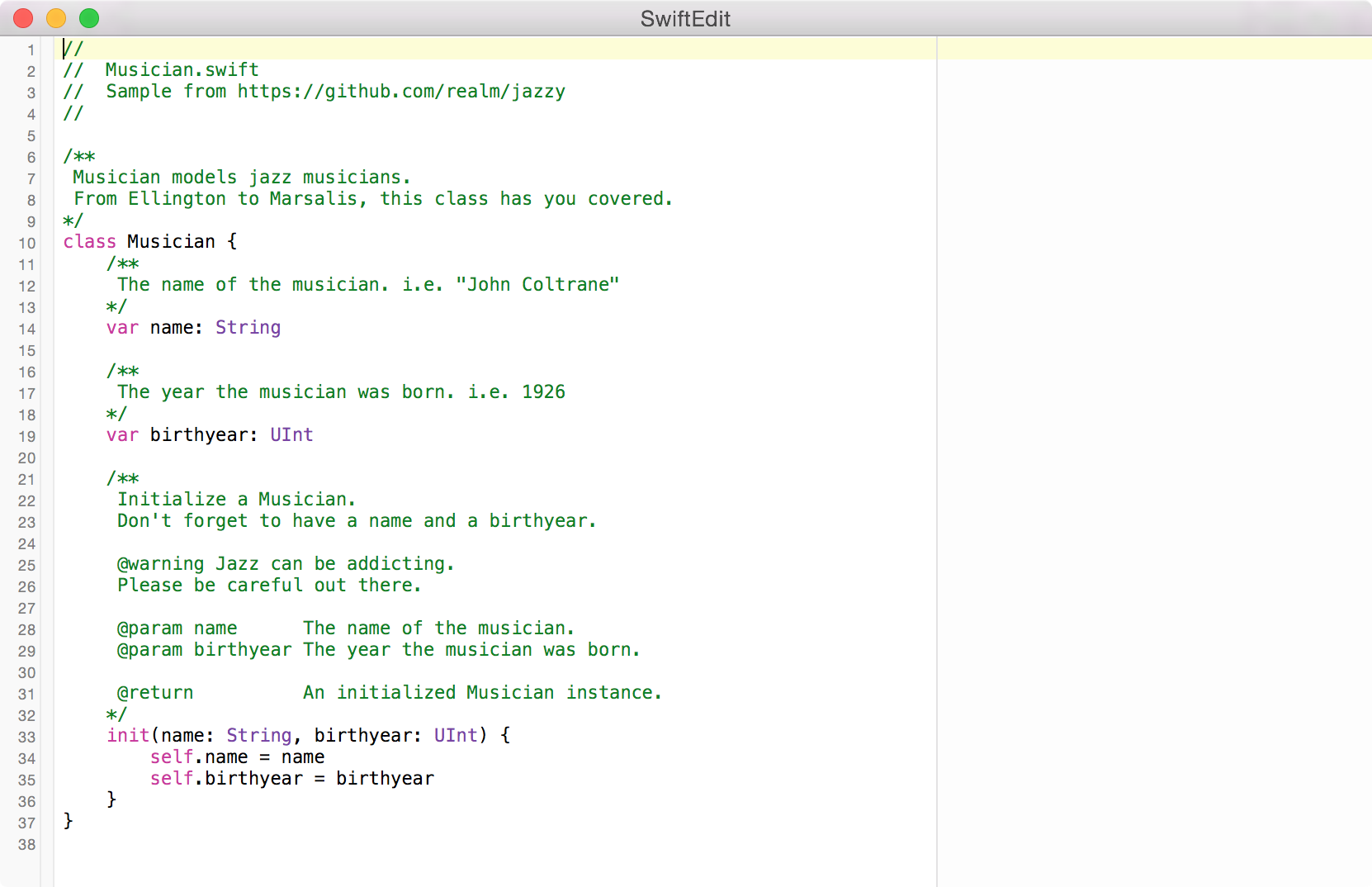 We’re just scratching the surface of what’s possible to build with SourceKit. Tools could be made to measure cross-language code coverage, or provide an editor where Objective-C and Swift can be edited simultaneously. Hopefully this article inspires you to build something with SourceKit and improve our tools in the process.

1: Objective-C in Xcode 6 (Beta 2) doesn’t use SourceKit at all, keeping Xcode’s traditional clang-in-process architecture. I expect this to change before Xcode 6 GM.